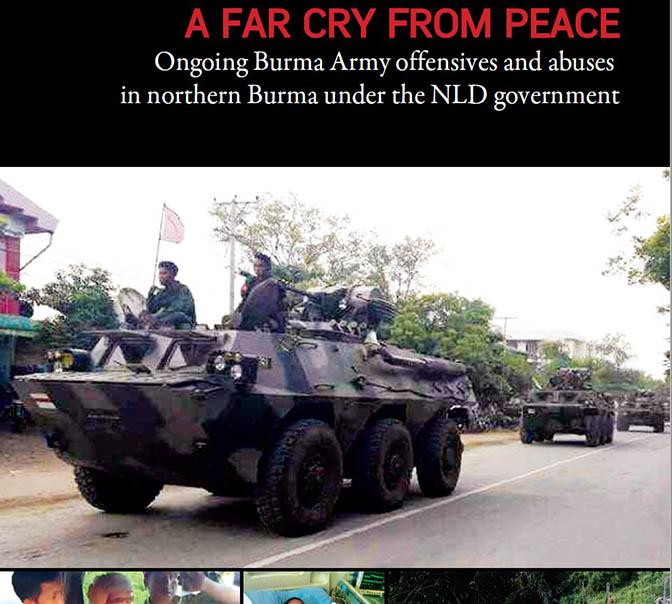 This report provides an update of the security situation in Kachin areas of northern Burma during the past year, since the November 2015 elections.

Despite hopes that the new government led by the National League for Democracy (NLD) would move the peace process forward and bring an end to fighting, Burma Army offensives in the north of the country have intensified, involving ongoing human rights abuses against civilians, and new displacement.

Mapping by KWAT shows the broad scale of military operations against the Kachin Independence Army (KIA) across Kachin and northern Shan State during the past year, particularly around the resource-rich Phakant and Tanai areas, and against KIA strongholds along the China border. Over 100 Burma Army battalions, numbering over 15,000 troops, have been deployed against the KIA during the past year, with increasing use of fighter aircraft.

The offensives have caused fresh displacement in Phakant and Muse townships, adding to the over 100,000 IDPs already sheltering in camps in Kachin and northern Shan State. Donor funding cuts and government restrictions on humanitarian access to camps in both government and non-government controlled areas have caused added hardship for the IDPs.

KWAT has documented ongoing, widespread abuses by the Burma Army against civilians in the conflict areas. There has been frequent arbitrary arrest and torture of male villagers, on suspicion of contact with the KIA. In the twenty-one torture cases documented – involving at least nine different battalions — villagers were tied up, blindfolded, kicked, hit with guns, had bamboo rolled on their shins, and were stabbed with knives. Six men and two women have also been killed or disappeared.

In several incidents, large groups of villagers, both men and women, have been arbitrarily arrested, and detained on suspicion of contact with KIA. Most recently, on October 11, 2016, 49 villagers from Putao in northern Kachin State were arrested at a Burma Army checkpoint when returning from an agricultural training organized by church leaders in a KIA area. The group, including six women and several elderly men, have been charged with unlawful association and are being detained in Moe Mouk Prison.

Heightening the fear and insecurity caused by these fresh abuses is the lack of progress in obtaining justice for past Burma Army violations. The perpetrators of the rape-murder of the two Kachin teachers in January 2015 remain at large, and the 73 year-old victim of military sexual assault in April 2015 passed away in June 2016 without seeing justice.

In short, KWAT’s findings show no improvement to the security situation in northern Burma under the NLD. The pattern of Burma Army abuse and impunity is the same as under the previous government, while the offensives have worsened. This is gravely disappointing, given the NLD’s stated prioritization of peace building, and bodes ill for the current peace process.