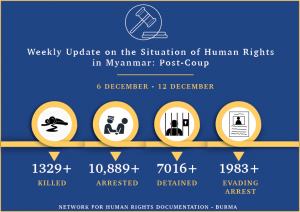 Human rights atrocities in Myanmar have shown no signs of abating. Quite the contrary, the volatile situation is worsening daily. On Sunday, 5 December, peaceful protesters were run over by military vehicles resulting in casualties and many injuries in Yangon. The junta denied that they did anything wrong in state-sponsored media propaganda. Days later, more protests were held in more stark defiance to the regime, proving once again that the spirit of the people cannot be broken. Youth are putting their lives on the line to ensure the Spring Revolution succeeds while the regime stumbles trying to exert control. Their behavior, and disregard for civilian lives is only fuelling the momentum behind the rallying calls for democracy.
The junta has put a target on the armed resistance movement in Sagaing region. State-wide atrocities have taken place which have put civilian lives at risk. Eleven people were most recently tied with wire, shot and burned alive. The majority of those killed were young people under the age of 30, with five being under age 18. Their scorched bodies are further evidence of the junta’s crimes against humanity, and impunity which permits them to commit these acs without accountability. In Sagaing region alone, at least 14 civilian bodies have been burned since February. More airstrikes in the region forced civilians to flee artillery firing and shelling in the following Sagaing region villages: Aung Si Myay, Aung Tharyar, Baw Kone, Lel Pyin Kwet and Mya Kan Thar. Despite the fear and anxiety these attacks provoke, a civilian who fled told local media outlet, Myanmar Now,  said “We are now on the run but I don’t care if our village gets burned to ashes. Old can be replaced by new. We can start over and try again. Our first priority is to eradicate the dictatorship.”

The junta is engaging in human rights atrocities to control the population and achieve their goal of completely squandering civilian dissent. Such a goal deserves condemnation in the harshest terms. Weak resolutions by UN bodies, and exclusions from regional meetings are not enough to stop the junta from committing acts of terrorism. Over the last week, more children were killed, and a National League for Democracy (NLD) official was shot and killed in broad daylight. Testimonies of women being assaulted and sexually harassed in detention are more evidence of the junta’s impunity and disregard for civilian lives. Despite all of the horrifying human rights abuses, the people on the ground in Myanmar are standing tall and refusing to let the cruelties exhibited by the military junta break their spirits. It is unacceptable that the international community has failed to support their rallying calls for peace and democracy. Governing bodies on the global stage must use their power to protect.

The Chin Human Rights Organization (CHRO) reported that a 45 year old mother was killed, and her two year old child seriously injured by a landmine planted by the military junta outside of their home in Mindat, Chin State. The infant has sustained serious head wounds, and lost both of her legs. The attack is yet another stark reminder of the horrors and atrocities that every day civilians have been forced to face.

The ongoing, increasing presence of the military junta in Karen State has forced civilians to put their livelihoods on hold. This has had worsening economic impacts for residents who are unable to earn an income and are fearful of being threatened or killed by the Myanmar Army.

The Karen National Liberation Army reported that armed clashes are increasing ‘on a regular basis’ as the junta expand their operations. Between October and November 2021, the junta recorded 355 clashes. All of the fighting poses serious risks to civilians who are at risk of being killed during artillery shells which are fired into villages, farms and plantations.  A report recently published by the Karen Peace Support Network, “Shelling Out Punishment Across Mutraw District” estimated that there were over 80,000 civilians displaced in Mutraw District as a result of target air and ground attacks.

The worsening situation in Kayah (Karenni) State has forced thousands to flee. Those who have sought safety in IDP camps have a multitude of fears, including the possibility of food running out. A local humanitarian organization expressed concern that the violence which has displaced civilians has led to food shortages. If the situation does not see any form of stability, food could run out within one or two months. Any delay in the provision of humanitarian aid only exacerbates the suffering of IDPs on the ground. Meanwhile, youth in Hpruso and Demawso Townships continue to be targeted by the military junta.

According to the Karenni Civil Society Network, over 150,000 people—more than half the population of Karenni State. Civil society organizations are working tirelessly to provide food, shelter and survival materials to those deprived of their basic access to goods and services. These efforts must be supported by the international community.