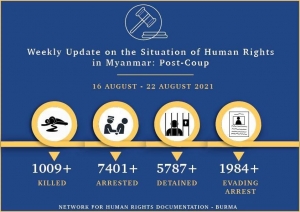 Over one thousand civilians have been killed by the Myanmar junta since their illegitimate seizure of power in a coup d’etat on 1 February. ND-Burma member, the Assistance Association for Political Prisoners told the press: “As long as the military is in power, they will continue to kill youths, professionals like doctors and teachers, men, women and children.” Evidence of the junta’s crimes against humanity are mounting amid a pandemic which is claiming the lives of dozens every day. In an incident which put the ruthlessness of the regime on full display, drunk junta soldiers in Sagaing region indiscriminately fired at civilians, including shooting a young man at point-blank range in the head who died immediately.

Sagaing region has been targeted in a series of attacks by the Myanmar junta amid the steady rise in opposition forces seeking to undermine and dismantle the military. A joint briefer released by the Assistance Association for Political Prisoners, ND-Burma and Nyan Lynn Thit Analytica showed the extent of the junta’s brutal campaign against innocent civilians in late July in Kani township, Sagaing. The overview was inclusive of photographic evidence and produced in Burmese and English.  The crimes documented are all in serious violation of international law. The findings, combined with those of many other civil society organizations before and after the coup, speak to the reality that despite claims which the Tatmadaw hinges their legitimacy on as the protector of the state – they are quite the contrary.

The junta is also doing everything they possibly can to target the democratically elected National League for Democracy (NLD). Nearly 100 NLD members have been arrested, while others have died from COVID-19 and related diseases in detention. The targeting of the opposition by the junta is literally taking lives.

Myanmar junta soldiers in the midst of the chaos and disregard for human life, are also defecting. According to reporting from Myanmar Now, approximately 1500 recruits have defected since the coup, with one captain stating: “If anyone who wanted to, could desert right now, there would only be the commander-in-chief and the flagpole left in the barracks.” Defected soldiers have expressed similar sentiments in the past as they urge soldiers to stand on the right side of history and align themselves with the people and pro-democracy movements. An additional 40 soldiers abandoned their posts with weapons in Tanintharyi and Magwe regions.

CHIN STATE
In Chin State, the Myanmar junta indiscriminately shot and fired at civilians. A woman outside her village was killed in the attack. According to the Chin National Organization, on the same day, soldiers shot a pregnant woman in her thigh. An elderly woman was also shot, and several other civilians were arbitrarily arrested.

KAYAH STATE
The Karenni Army and Karenni Nationalities Defense Force are clashing regularly with the junta forces in Hpruso Township, and Pekon Township in southern Shan. Most of those displaced are women and children – including one month old babies and pregnant women.

In the latest update by the Karenni Civil Society Network, 82 people in Kayah and Pekon Township (Shan) have been killed since the coup, 150 arrested and 106 injured. With COVID-19 cases increasing, including in IDP camps, humanitarian aid is urgently needed. According to a tally from Radio Free Asia, over 170 000 people have been displaced by fighting in Kayah State alone in the last six months.

SHAN STATE
Conflict in Shan State continues to displace civilians. Several internally displaced persons were injured after stepping on a landmine in a tea plantation where rival Shan ethnic armed organizations have been fighting. COVID-19 lockdowns limited access to hospitals as routes were closed. Civilians have made multiple requests to armed groups in the areas to stop laying landmines in civilian areas.

The fighting between the Restoration Council of Shan State, the Ta’ang National Liberation Army and the Shan State Progress Party has been largely fuelled over territory and claims that the various groups were targeting civilians in their respective areas. Hundreds of residents have been forced from their homes in a fearful retreat.