The Assistance Association for Political Prisoners (AAPP) pays respect to the heroes who sacrificed their lives and liberty to fight for democracy and human rights.

In today’s detainee list, we received and documented the names of (270) people. However, we understand approximately one thousand people were arrested across Burma today. We will continue to investigate these and make appropriate announcements when.

As of February 28, a total of (1132) people have been arrested, charged or sentenced in relation to the military coup on February 1. Of them, (4) were convicted; (2) to two years imprisonment, (1) to three months and (1) to seven days. (61) have been charged with a warrant and are evading arrest, (299) were released. A total of (833) are still under detention or have outstanding charges/evading arrest, including the (4) sentenced. From February 1 to the 28, approximately (30) people have been killed due to the violent and arbitrary crackdowns.

Today, people across the country are protesting against this military dictatorship and so called-police, soldiers and thugs are using weapons, some used in conflict zones, against unarmed civilians. Live ammunition, tear-gas, flash bangs, batons, water cannons, even vehicles are being used to assault peaceful demonstrations.

Protestors but also unarmed non-protesting civilians across Burma’s towns and cities were attacked and around 20 from Rangoon, Mandalay, Dawei, Bago, Magwe, Pakokku and Kyaukse were today killed while protesting and approximately 200 were injured across Burma. 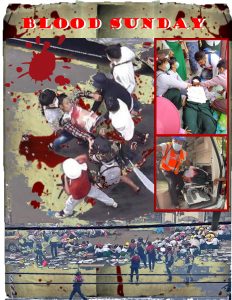 Deaths and injuries will likely increase and people’s peace and security will continue to be deprived without intervention by the international community. Reports have also circulated that junta police are demanding money and other possessions from detainees to be released. This is criminal extortion. Corruption is incentivized by this coup regime, it is an incentive found throughout the military’s operations in conflict zones. If the military and police detain and kill they can take everything they find. Junta police steal food and water in the crackdowns, they are tired and starved by their military officers, it is intentionally done. So-called police, soldiers and thugs are made to be hungry, thirsty, and exhausted so they will be even more aggressive.

The tactics of peaceful protests have had to adapt to the ruthless pressure of a brutal regime. State terror is escalating to frighten demonstrations which are returning day-by-day. They are building barricades and obstacles to restrict the juna coups vehicles and offer makeshift protection.

AAPP will continue to keep you informed of verified daily arrests, charges and sentences in relation to coup, and update our lists to the details of these alleged offences. If you receive any information about detentions of, or charges against CSO leaders, activists, journalists, CDM workers and other civilians in relation to the military and police crackdown on dissent. Please submit to the following addresses: