The bodies of 13 Rohingya men and boys were found dumped on the side of a road in a northern Yangon suburb on Monday morning, two sources told Myanmar Now.

The victims, who were estimated to be between the ages of 16 and 20, were found dead near Ngwe Nant Thar, a village in Hlegu Township about 25km north of Yangon’s city centre, said a local regime authority who spoke on condition of anonymity.

“There were no injuries found on their bodies. The cause of their deaths is still unknown. The bodies were sent to the Yangon General Hospital and we are still waiting for the autopsy results,” the official told Myanmar Now on Monday afternoon.

The bodies were all dumped along a road less than a kilometre from Ngwe Nant Thar, he added.

A police source familiar with the case said that while the victims were known to be Rohingya, it was unclear where they had travelled from or how they got to Ngwe Nant Thar.

“I was informed that they were smuggled inside a vehicle and died due to a lack of oxygen,” the police source said.

Myanmar Now was unable to independently verify this information.

Most of Myanmar’s more than one million Rohingya have fled the country in recent years due to ethnic cleansing campaigns by the military. They have been subject to restrictions on their freedom of movement and other basic rights for decades.

These restrictions have made them vulnerable to human traffickers, who promise them better living conditions and work opportunities in Malaysia and other countries in the region.

Many are arrested in transit as they make the journey from Rakhine State to the Thai-Myanmar border or coastal areas in the country’s south. They are then charged with immigration offences that carry sentences of at least two years in prison.

On November 28, Radio Free Asia’s Burmese-language service reported that 54 men and 14 women of Rohingya ethnicity were arrested at a checkpoint in Hlegu while travelling inside a truck. 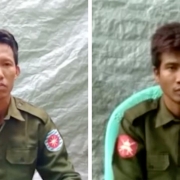 ‘Kill All You See’: In a First, Myanmar Soldiers Tell of Rohingya Slaughter